What’s with the name?

The following history of the Lost City of Ubar and Ubar Grotto was composed by Pro. Tim Settlemyer, Charter Master of Ceremonies. It was first given at the Constitution of Ubar Grotto on July 23, 2011. Some of the story is factual and some is purely for entertainment. We’ll let you figure out which is which!

In forming a Grotto, it is recommended that the name should be Persian in origin. But for us, it also had to have a tie with our area. So, as it was told to me, our Chief Justice, George Hindson, diligently scoured the multitude of Persian names and happened upon the lost city of pillars – Ubar.

The famed city region of Ubar was located in an area known as the Rub’al Khali, or the “Empty Quarter”, presently in the Arab state of Oman. This vast desert landscape was barely inhabitable and the region of Ubar and the city became a great stopping point, owing to it location on the overland incense trail.

According to legend, Ubar had be come a center trade and wealth in the Persian empire;  so tremendously wealthy in fact that its fame for excess and pleasure was known throughout the empire. And just like many cities of this nature, at the height of it popularity and wealth, it became a place of corruption and wicked living that was ripe for disaster.

One day a prophet by the name of Hud arrived at the city to warn of the excesses and vices and warned King Shaddad, the last king of Ubar, that God would punish this wicked living by destroying not only the city, but the entire civilization of Ubar. The king scoffed at this thought and went about his decadent ways. However, the prophet’s warning took shape and the King realized in the end that his kingdom was … “fubar”… And in a blink of an eye, the city and civilization was lost to the endless sands of the desert.

The flamboyant Arabist and explorer Harry St. John Philby wrote about the last King of Ubar’s exploits in his journals. “He had waxed wanton with his horses, and eunuchs and concubines in an earthly paradise until the wrath came upon him with the west wind and reduced the scene of his riotous pleasures to ashes and desolation”. 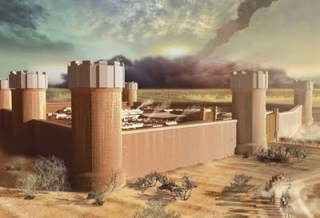 Philby traveled to the Middle East in efforts to find the lost city hoping to become famous for discovering this great ruin, but came back home distraught over the fact that all he found was sand – plenty of sand! Well what do you expect to find in the desert?

Philby was not the only explorer to have high hopes and finding the city. Other travelers followed suit, Bertram Thomas (author of Arabia Felix), Wilfred Thesiger, and British airman Raymond O’Shea. Even the famed British hero T. E. Lawrence, also known as Lawrence of Arabia, considered the trip across the hot sands in search of the famed lost city of Ubar. Lawrencewas so enthralled with this city that he nicknamed it the “Atlantis of the Desert.” But as each one tried, each one failed to locate this enigma and the legend grew and the stories became more fantastic.

Then in the early 1980s, a group of researchers picked up the lantern in search of the city. Using the highest modes of technology, MASA remote sensor satellites, ground penetrating radar, Landsat Thematic mapping program data and images taken from the Space Shuttle Challenger, as well as SPOT data (Systeme Probatoire d’Observation de la Terra — system of earth probing observation satellites) were able to locate some old camel train routes and intersecting points leading to an outpost and perhaps the ruins of the city of pillars. This came after months of delays, dead-ends, and difficulties ranging from antenna problems with radar, to sandstorms and … oh that’s right … a little skirmish known as the Persian Gulf War.

Then the fun began! A team of explorers started making trips to the Arabian Peninsula to  discover and explain the lost city of pillars. This team was comprised of Ronald Blom, a NASA scientist; Ranulph Fiennes, a British adventurer; Juris Zarhins, an archeologist and professor of sociology and anthropology at Southwest Missouri State University; film maker Nicholas Clapp (who had been to Oman previously making a documentary on an endangered animal called the Oryx when he discovered Arabia Felix and instantly grew curious about Ubar); and George R. Hedges, a Los Angeles attorney (because there always has to be an attorney.)

The group was instantly met with even more difficulties — poisonous snakes and scorpions, gun-toting shepherds, and the ever popular heat of the desert. But they finally arrived at a point of an old 16th century fort and oasis known as Shisur. This area had been visited by many of the other explorers from Thomas to Thesiger, but had been ruled out immediately due to the dating of the ruins of the fort.

However, this new set of explorers dug deeper and within weeks had unearthed a wall and towers of a fortress city dating back close to the time of Ubar’s greatness. While it is truly difficult to pinpoint exactly that this was indeed the lost city, all signs of their discovery point to it being the one and only Atlantis of the Sands.

The city fortress, as they discovered, was built upon a large limestone cavern which served as the source of water for the city. As the water table dropped due to consumption, the limestone ceiling and walls dried up and caused a collapse destroying the oasis city while the sands of the “Empty Quarter” covered up the ruins of the city.

Now that we have bored you with the details of the lost city, we come back to the Grotto which has been constituted today.

It may benefit all of our visitors to note that during the voting of several items, it has become customary to vote positively by saying “Ubar” and negatively by “Fubar.” This is no coincidence, as the negative vote is a well known military acronym for “fouled” up beyond all recognition.

While the Qur’an mentions a certain city in the region know as Iram, the city of pillars, Ubar, had originally been synonymous with the region and the people in the “Empty Quarter”, not just the city itself. This Grotto is not just comprised of men from Elizabethtown, but the area of South Central Pennsylvania, from Carlisle to Lancaster, Lebanon to York, and all stops in between. We bring to Grotto a rich history and tradition with many “pillars of the community” as our core group.

Just like Ubar, South Central Pennsylvania had been a vast desert in the land of the Mystic Order of the Veiled Prophets of the Enchanted Realm. As Grottos have existed in Pennsylvania for some time, none were located in this area. To the north of us is the land of Zafar (Williamsport, PA), to the west, the region of Islam (Pittsburgh, PA) and to the east, the gardens of Delco (Broomall, PA.) It is from this last Grotto that a small group spun off from to form this new oasis in the desert. But, all together, we share in the wealth and trade of the Enchanted Realm.

However, unlike the mysterious Atlantis of the Sands, we intend to stay, heeding what the Prophets tell us. While we still enjoy the earthly treasures of the world, we will arise out of the desert,  a shining lantern to South Central Pennsylvania.