… is something we hear at Ubar Grotto all the time. Many people have wondered why such a small Grotto would have a need for such a large implement of destruction. The first answer given to this question is “Why not?” However, the history of the sword known as “the Ubaritar” is intricately tied to the formation of the Grotto. 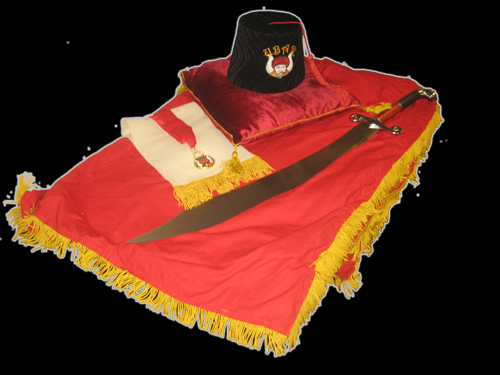 Just prior to the Grotto being constituted, Pro. Tim Settlemyer, Charter Master of Ceremonies, and Pro. George Hindson, Charter Chief Justice, were on a scouting mission to find a plentiful source of mead. During their travels, they found themselves near the Mountain of Hope where an antiquities dealer had set up shop. After looking at his wares for some time, they came across a large scimitar. The cold steel shimmered in the dusky light. The sword seemed to possess a force of its own; a force the two Prophets could not resist.

After an appropriate amount of haggling, the two secured the sword for a decent price and returned with their prize to the Charter Monarch. He  was most pleased with this purchase and had the two reimbursed out of the Treasury of Ubar. The sword was now the property of the Grotto, but what to do with it?

Such a fine weapon should not go to waste on display, so the Monarch issued it to one of his most loyal servants, Pro. Horace Mason, Charter Sentinel of Ubar. The sword proved mighty, standing almost as tall as the man assigned to wield it!

The Ubaritar has become a symbol of Ubar Grotto, being carried by the Sentinel and used in his duty to deter cowans and eavesdroppers from spying on the rules of Ubar. The sentinel remains ever vigilant, ready to unsheathe the mighty blade at a moments notice!