March 22nd, 2014 marked a great start to the membership year for Ubar.  On it’s first Ceremonial of 3 this year, half of our membership goal was attained!  Marking a feat just as impressive, over 50 non-neophytes joined in the fellowship that evening — no easy task for Sunday night.

Before the meeting, Prophet Spooner decided to bribe the delegation with $5 cigars.  The bribe was successful, as all heckling was directed at Prophet Il Duche.  Prophet (and soon to be Fryar) Richards provided a tobacco locker to be auctioned for charity that Prophet Loughin couldn’t figure out how to operate.  All told, the Grotto collected $286 for children to receive dental work.  Awesome job prophets!

Our Pants-fearing Monarch then called the meeting to order.  Discussed was the possibility of a “floating” meeting, one where the Grotto could meet closer to a group of Prophets that could not always make the meetings due to the long drive.  The Prophet that made this suggestion did not provide a location, and he was heckled mercilessly.

After another long-winded report from the Fund Raising chair (who promoted that guy?), along with much shorter reports from the Sheiks, Prophet Tim “The Tyrant” Settlemeyer, PM, donated the flag of the Whiskey Rebellion to the Grotto, which we shall fly with pride.

After the meeting, 11 new prophets were brought into the Realm.  As a final treat before he leaves on his Friary Journey, Prophet Richards provided one last performance as His Majesty.  We shall miss him dearly.

As the Ceremonial drew to a close, Prophet Anthony, PM, promptly kicked everyone out, the fuddy-duddy that he is.

Our next meeting is on April 26th.  We hope to see all of you there! 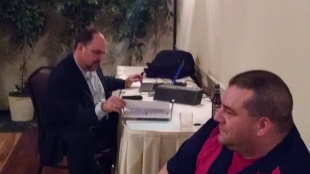 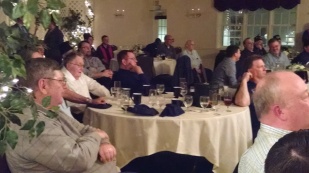 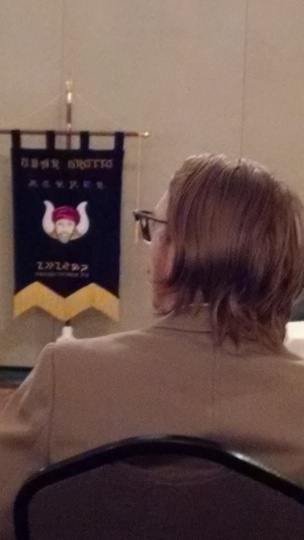