Posted by ubargrotto on December 15, 2014
Posted in: Just for Fun. Tagged: Installation, Sheik.

All good things must come to an end. Thankfully, all bad things generally do as well. That was the case on Saturday, December 13, 2014, as the reign of Pro. Tim “The Tyrant” Settlemyer came to a screeching halt, as Pro. David Andrew Labagh was installed as the fourth Monarch of Ubar Grotto.

The event was held at the Lucky Ducks Restaurant in Elizabethtown, PA. This location is significant, as it was in the same building that Ubar held its first meeting more than three years ago. Ubar took over a good chunk of the second floor, sharing space with unsuspecting diners, who learned what it was to Grotto while enjoying their chicken fingers. The Prophets gathered at 6 PM for dinner and beverages. After several toasts, and good bit of well intentioned verbal jabbing, Pro. Settlemyer took his station to peform his last duty as Monarch – the presentation of the coveted title of “Sheik of Ubar.”

The Sheik of Ubar is given only once a year and is chosen by the elected officers of the Grotto, at the direction of the Monarch. Pro. Settlemyer was pleased to honor Pro. Jay M. Laser. Upon hearing of this selection, most of the crowd exclaimed “Who’s Jay Laser?” But, lo and behold, sitting quietly in the corner, covered in his dining bib, was Pro. Jay. The Monarch then led the officers in the conferral of the honor, including the title, plaque, and jewel. As usual, Pro. Laser was at a loss for words (he was also at a loss for a fez later in the evening, but a generous Past Monarch had his back on that one!)

Following the Sheik presentation, Pro. Seth Anthony, PM, was called upon to perform the Installation Ceremony, with assistance from Pro. George Hindson, PM, acting as Marshal, and Pro. Kimber Smith, PM, performing the part of Chaplain. While several officers were unable to attend, due to holiday commitements, Pro. Anthony installed those present, including Pro. David Andrew Labagh as the fourth Monarch of Ubar Grotto.

Pro. Labagh’s first act was to present Pro. Settlemyer with his Past Monarch’s Patent and Jewel, promptly telling him that he could stay on as Monarch if he wished. Tim declined and the show was all David’s. With not much left to do, David spoke about his plans for the year and then adjourned the gathering, enabling the Prophets to return to their sympathy and good fellowship, which had been interrupted by all of the official hullabaloo.

It was a great night for Ubar Grotto and we’re pleased to take direction from our new Monarch. A toast! 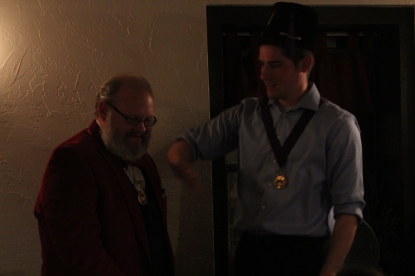 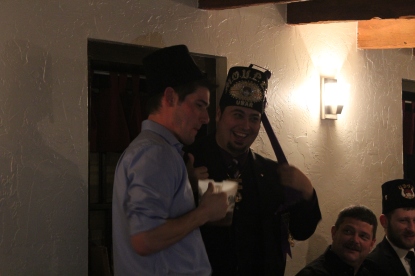 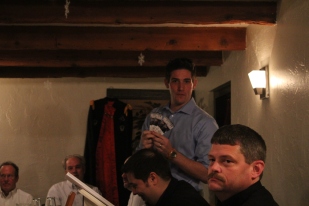 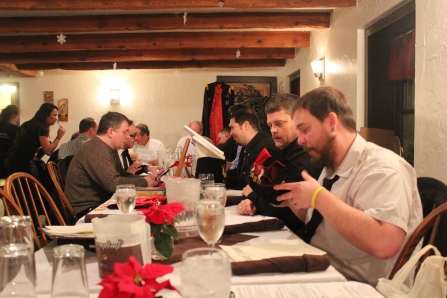 Your Monarch is watching. Be warned.