Hail! The Monarch of Ubar Grotto!

Posted by ubargrotto on December 17, 2012
Posted in: General Information.

On Saturday, December 15, 2012, the members of Ubar Grotto gathered to celebrate the holiday season and to enthrone the second Monarch of Ubar Grotto. The event was held at Conestoga Lodge No. 134, BPOE, in Lancaster, PA. More than 30 Prophets attended, including three visitors from Azim Grotto of New York, New York. 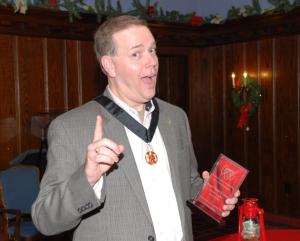 The evening kicked off with the presentation of a new altar bible by the retiring Monarch, Pro. Seth Anthony. Following this, Pro. Anthony, assisted by Pro. George Hindson and Pro. David Labagh, presented the first Sheik of Ubar to Pro. Tom Labagh. This prestigious honor will only be given to one Prophet a year, in recognition of service above and beyond the call of duty.

With the honors and presentations out of the way, the Installing team took their positions to install the new officers. Pro. Seth Anthony served as Installing Officer, with Pro. Victor Mann, Monarch of Azim Grotto, taking the Chair of Marshal, and Pro. John Roberts, Chief Justice of Azim Grotto, filling the position of Chaplain. After due ceremony,

Pro. George H. Hindson was installed as the second Monarch of Ubar Grotto, along with most of his other officers. Pro. Tim Settlemyer, Chief Justice – Elect, could not be present and was mocked accordingly. This continues the tradition of the Chief Justice of Ubar being a position to be mocked rather than feared. It’s going to be a long year for Tim.

After all the officers had taken their positions, Pro. Hindson was placed in charge of his Grotto. He made several presentations. First, he presented Pro. Anthony with the regalia of a Past Monarch as well as a personal gift, a nicely embroidered Ubar Grotto messenger bag. Pro. Victor Mann then presented George and the officers with trophies in their likeness, in recognition of their service. Not to be outdone, Pro. Andy Sterling, Chairman of the Community Service Committee, presented George with a can of Cafe Bustelo Coffee, to help him through his year. Further, Pro. Tom Labagh gifted the new Monarch a Ukulele so that he may help with the formation of the newest planned unit at Ubar Grotto, the Ukulele and Kazoo Band. The final gift of the evening was the most exciting, however, as Pro. Tom Labagh gave all present a candy cane glass and filled them for a toast to Ubar Grotto! It was a great way to end a fantastic ceremony.

Following the event, the new Officers had their pictures taken by Pro. Rick Gillardy, Photographer for Ubar Grotto. With all said and done, many members retired to the main hall at the Elks to enjoy a cigar and some fellowship. It was then that a brilliant idea was hatched to have the group go do karaoke at a local establishment. More than a dozen Prophets headed over to the Marion Court Room, located in central Lancaster, and spent the rest of the night enjoying karaoke with the other Prophets.

Special thanks go out to Pro. Rick Gillardy for taking photos, the Prophets from Azim Grotto for attending, and to the Elks for hosting us.