Fall in with Ubar!

Posted by ubargrotto on August 14, 2012
Posted in: Announcments. 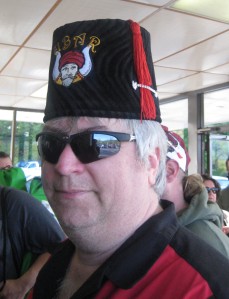 Pro. Bitner expects you to show up to things!

As the summer winds down, we are looking forward to getting back into the swing of things with Ubar Grotto. As such, we wanted to drop everyone a line about upcoming events and what to expect over the next month or so.

First up, on Friday, August 24 we have an open house at St. John’s Lodge No. 260 in Carlisle from 6 to 9 PM. Pro. Russ Kratzer has volunteered to be there  (and hopefully head up the delegation.) We”d like at least one more Prophet there to help out. If you’re willing to give him a hand, let us know!
On Monday, September 17, a group of us will be going up to Azim Grotto in New York City to help with their first Ceremonial in over a decade. They will be holding the event at the prestigious Players Club, just off of Gramercy Park. The event starts at 6 PM, meaning we will need to leave Elizabethtown by 1 PM or so. We are taking a van which can seat 6 comfortably. Three of those seats are claimed. After the event, will go back to New Jersey to stay the night somewhere, returning to PA on Tuesday morning. The Azimians always show us a great time, so you won’t want to miss this! If you’re interested in going, let me know, and I’ll mark you down.
One of biggest events of the year is on Saturday, September 22 – Autumn Day at the Masonic Village. We have already lined up some HARD Girls to attend, but we’ll need lots of  Prophets to help cover the booth. It’s open from 10 AM to 3 PM and it’s best to have 2 guys at the booth at a time. If you’re wiling to cover a time slot, let us know.
The next day, September 23, will be our September stated meeting. More information will be coming out with the notice, but please note – anyone wishing to join at the October meeting / Ceremonial must have a petition filed by the September meeting so it can be read and approved. We’re hoping to have another large class this time… we already have 5 petitions in, but we”d like to see 5 more. Our end of the year goal was 75 members and we can totally do that. Please, if you have friends who are interested in joining, now is the time. Cost is $175. We won’t be doing another Ceremonial until after the new year!
We also have a big fundraiser coming up on Sunday, September 29. This is our Knights Night Out Dinner Theater event. This is the fourth year of this event, but the first year that Ubar is on board for it. Many of our members have attended in the past and can attest to how much fun it is. If we get a good turn out, we can generate $500 to $750 for us and for the local DeMolay Chapter, so please promote it and attend. All the info is available here… https://ubargrotto.com/2012/05/15/knights-night-out-vi-arabian-knights/
Last, but not least, there is the PA Grotto Association meeting / party. This will be held at the Holiday Inn in Harrisburg on Friday, October 5 and Saturday, Oct 6. All Ubar members are invited to attend (and drink heavily.) If you are planning on coming, grab the registration form and get it sent in!This is our first Association meeting and we’re acting as the hosts, so let’s put on a good show!
Whew – that’s it for now!