Ubar Dodges Down to Delco

Posted by ubargrotto on October 20, 2011
Posted in: General Information. 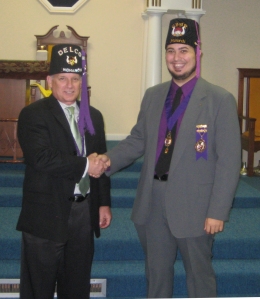 On October 19, 2011, three members of Ubar Grotto joined Pro. Seth Anthony, Supreme Council District Deputy, on his first official visit to Delco Grotto, located in Broomall, PA. Delco is the “mother” Grotto of Ubar and the members were excited to share in the sympathy and good fellowship there.

Joining Seth were Prophets George Hindson, Chief Justice; Horace Mason, Sentinel; and new member Dan Colón. The group piled into a van, being described as “Muppets in a Studebaker” and set out for the suburbs of Philadelphia. After a bitter fight with the Schuykill Expressway, the men found their way to Community Masonic Hall where Delco meets. They were warmly greeted by the presence of fourteen Prophets, including several Past Monarchs. Pro. Hindson made sure that everyone present received a “Real Men Wear Fezzes” wristband as a token of appreciation from Ubar.

Pro. Robert Burns, Monarch of Delco Grotto, extended the District Deputy fraternal greetings and asked him to present an Enchanted Lantern to Pro. Russel Combs, Master of Ceremonies for Delco. Pro. Anthony then gave those assembled an update on the Grand Monarch’s programs and introduced the members of Ubar that traveled with him.

Pro. Burns thanked the Ubar group for visiting and presented a talk about Masonic symbolism in cinema, which was well received. Following, the members and visitors retired to Charlotte’s restaurant where they enjoyed a fabulous meal and some great wine. As a final Ubar touch, Pro. Anthony led the group in an Ubar toast, thanking the members of Delco for their support.

It was a great first visit for the two Grottoes and they both look forward to many more in years to come! 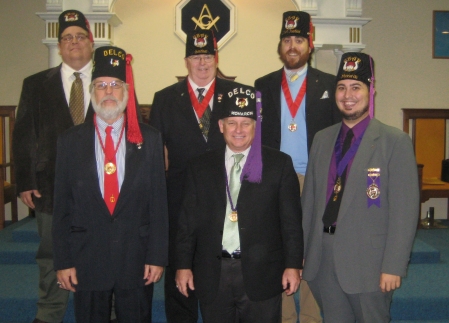